It's The Little Things: Replacing Your Garmin 205, 305, or 405 Watchband with Something More Comfortable 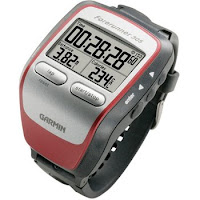 You've probably heard the saying "It's the little things in life that make a difference."  Nowhere is this more true than in long distance running, where the slightest little rub, irritation, or annoyance can become a major deal after an hour or two on the road or trail. That is why the number one thing I care about in my running gear is usually comfort. That is also why I have had a real love/hate relationship with my Garmin Forerunner 305.

What I love about my Garmin is that it is accurate, it gives me the data I need, and most importantly, I can see the screen. This model allows me to set the number of screens, from 1 to 4. Even these old English teacher's eyes, that have been worn down by many years of paper grading, can manage to see the screen clearly when it is set on 1 or 2, and usually even 3. That is a big plus.

However, what I have always HATED about the watch is that it is so uncomfortable. I am going to ignore the size for this post, because I can't change that, and focus on what I can change. (But come on Garmin people, women wear these too!!) The band has always been super uncomfortable on me. First of all, I am a fairly small woman, at least in my wrist size. To get the Garmin to fit snugly on my wrist, I have always had to tug it down to the very last hole in the band, and even then it did not feel real snug. The plastic of the band was also stiff, and it just was never comfortable. Some women, such as my friend Leslie, even wear wrist bands under the watch to make it fit more snuggly and make it more comfortable. I lived with it and so did most other women I knew that had this model because I did not know I had an alternative.

That is where having a great network of running friends can help. My new running buddy Kate showed up one day and said, "Guess what! I just got the coolest new band for my watch. I love it!" It was a velcro band that allowed her to snug it down on her wrist (which is even more petite than mine). Now her watch was a 405 not a 305, but I started to wonder if maybe there might be something like that available for my Garmin.

A quick search of the Internet showed me that they did have them, and they were available at Amazon (shameless plug for Amazon  -- I am an Amazon affiliate). After reading the reviews and making sure they would fit my model, I ordered one. It was only $13.10 plus shipping (18.68 total), so I figured it was worth a try. It came earlier this week, and I have to say I am thrilled. For me, it is a much more comfortable alternative to the crappy plastic strap that comes with the Garmin.

Let me tell you a little about it in case you are interested. I was initially worried, until it got here, about how it would attach and whether I could find the band changing tool that had come with my Garmin. That was wasted worry. When the box arrived, it contained everything I needed to change the band: the new strap, an extender strap for larger wrists, the tool, and the two pins needed for the new band, as the original pins seem to be built into the plastic strap. The box also contained instructions.

Honestly, the hardest part about replacing the band was finding my glasses to be able to see the end of the tiny pins and tool. From that point forward it was easy. The tool slips in between the watch and the plastic band to compress the pin. The band pops right off.  The new pins slip into the slots in the velcro band. These then slip back into the slots in the watch. Easy!!

The velcro band actually runs across the back of the watch itself which has created some comments from reviewers that they had to take the band off to charge the watch. This is absolutely NOT true (at least not if they installed it correctly). The charger slides right under the band when it is time to charge. It is made that way.

All in all, I love the band. My only complaint, and it is a minor one, is that because my wrist is so small the end of the band sticks out a bit, but so far it hasn't annoyed me so is not a problem. One positive, as Kate pointed out, is that you can wear it easily over long sleeves, and if you want to push up your sleeves, it is easy to loosen and readjust.

*** There are different strap kits available for the different Garmin models. Please see the links at the bottom of the page for your model.

As I said before, it is the little things that can make or break a running experience. Just having a more comfortable watch band seems like such a minor thing, but since it is something I use most every day, it is nice to have something that is comfortable. If  you hate your Garmin band, you might want to consider a change.

Posted by wyldrunner@Through a Running Lens at 2:53 PM

WHAT'S ON YOUR MIND?
I would love to hear from you!! Please feel free to comment, ask questions, leave ideas for future postings, or just say "hi."

Through a Running Lens Fan Page | Promote Your Page Too